Today we live in a commercial world devised to stimulate appetite and promote an excessive consumption of calories. Instrumental influences include the advertising and availability of processed energy dense foods and beverages, particularly those eaten outside a meal context (e.g. snacks), shifts in serving size standards favouring larger portions, and the relative cost ($…

Today we live in a commercial world devised to stimulate appetite and promote an excessive consumption of calories. Instrumental influences include the advertising and availability of processed energy dense foods and beverages, particularly those eaten outside a meal context (e.g. snacks), shifts in serving size standards favouring larger portions, and the relative cost ($ per kcal) and accessibility of an unhealthy diet relative to a “healthier” diet. While some might describe the current food environment as “obesogenic”, what strategies do we have at our disposal for “leanogenic” reform? Of course, a comprehensive change in mainstream approaches will require political and cultural transformation, and no “magic bullet”. However, thankfully, there are numerous mindful decisions we as the consumer (or the dietary prescriber) can make to help one combat the threats to successful weight management and health from an injurious eating world.

Higher satiety foods (those with an improved ability to restrain appetite in the time after feeding) could be part of this approach, because they directly encourage reduced food intake and also support compliance with healthful eating and weight controlling strategies, by reducing the effect of feelings of hunger on drive to eat, and mood. The concept that the sensation of satiety is reliant on more than just the metabolic effects of nutrients in the gut and intestine was conceptualised over 25 years ago. The idea proposes that even before food reaches the gut, cognitive and sensory signals produced by the sight and smell of food, and by the sensory experience of food in the oral cavity will affect not only how much is eaten at that eating period (satiation) but also in the period after ingestion. These initial satiety signals will integrate with post-ingestion and post-absorptive signals to govern satiety. 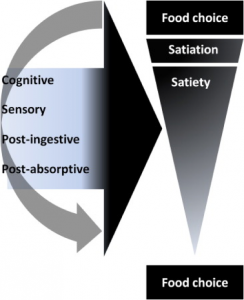 Effect of nutrients on satiety: protein

Two foods of equal calories may have discrete effects on satiety if their macronutrient compositions differ. For example, women whose diet was modified to be high in protein and carbohydrate for a day reported higher levels of satiety compared to another day when the principle energy source of their diet was fat, despite the diets being matched for calorie content. The concept of a hierarchy of satiating influence of macronutrients in the order of protein > carbohydrate > fat goes some way to elucidate why not all calories will have the same impression on satiety.

Protein is celebrated as the highest satiety macronutrient because of substantial investigational and real-world research demonstrating that increasing the protein composition of the diet without changing net calorie intake can lead to improved feelings of satiety.The body of research suggests that increasing the protein content of a food is an efficacious way to deliver greater satiety to the consumer, however manipulating the macronutrient content of a food while keeping calorie content constant means it is difficult to ascertain whether these effects are due to the greater satiating effect of protein, the reduction of less satiating nutrients carbohydrate and fat, or a combination of the two.

Effect of nutrients on satiety: carbohydrate and fat

Inorder to optimise satiety in the diet, the carbohydrate-to-fat ratio must also be considered. Protein’s place at the top of the satiety ladder is fairly well established, but the order of carbohydrate and fat is often debated, with this discussion further convoluted by variability in glycaemic responses to carbohydrate consumption which can influence satiety signalling. According to the research, consuming more energy from carbohydrate than fat has been associated with reduced chance of being overweight, with the inference being that high carbohydrate foods are more satiating than those that are high in fat. In free-feeding trials when people are offered a range of high fat foods, they often consume more energy than when they are offered high carbohydrate foods, a phenomenon termed high fat hyperphagia.

One principally significant property of fat is that per gram it provides more than double the energy of carbohydrate and protein. The fundamental view is that fat’s high energy density per unit of weight largely explains its low satiety value. A high fat food will usually be lesser in weight and volume than a high carbohydrate food of similar calorie content, and this difference might affect the duration of nutrient processing in the gut, as well as consumer beliefs about the likely outcome of consuming that food. To highlight this point, research has shown people tend to believe a small serving of food will not be enough to satisfy their hunger irrespective of the number of calories it contains, with these satiety expectations thought to influence eating behaviour.

Effect of nutrients on satiety: fibre

Fibre is believed to impact satiety in numerous ways, including the ability for fibre to bulk up the volume of food, to cause an increase in food viscosity, and to cause fermentation in the gut.More generally, a fibre-rich diet is thought to enhance satiety and weight control because it will be predominantly made up of foods low in energy density, such as fruit and vegetables, which when eaten in the same volume as high energy dense foods are just as satiating but contain less calories.In addition to the direct effects of fibre, fibre increases gastric distension and decelerates the rate of gastric emptying, two processes known to heighten levels of satiety.

Effect of food viscosity on satiety

According to the literature, food texture (or relative viscosity) may serve as a reliable indicator for future sensations of satiety and can cause expectations about the affect a food will have on appetite. Textured foods require mastication/chewing which will slow rates of ingestion and increase exposure time to the oral cavity, likely signalling satiety. The mechanical processing of food in the mouth might be one way in which the nutrient content of a food is perceived. Indeed, chewing has been associated with satiety-related neural signalling and release of hormones that influence appetite.This aligns with results from systematic reviews showing a positive association between calories consumed in liquid form and weight gain. To support this premise, research showed that increasing the viscosity of a chocolate pudding reduced eating rate and increased subjective reports of satiety. Hunger was also shown to reduce when a milkshake was “thickened”, and when a yoghurt smoothie had enhanced thickness and creaminess it caused an increase in perceptions of how satiating it was going to be, and subsequently reduced calories consumed at lunch.

Effect of food beliefs on satiety

One pragmatic way to influence beliefs about food is through nutrition labels/branding (e.g. “fuller for longer”) or (e.g. “high protein”) which may influence a consumer’s expected consequences of consuming that food. Studies of food labelling provide some support that this type of information can change how much a consumer will eat of that product and their subsequent appetite. In one study, lunch intake was higher after consuming a high calorie yoghurt labelled low fat compared to when no information was labelled on the yoghurt. In another study, consuming a beverage described as a high calorie milkshake caused participants to report feeling fuller and reduced calorie intake at a subsequent meal, compared to when this information was not present. Finally, labelling a fruit smoothie beverage with a high satiety message enhanced subjective reports of fullness and reduced appetite.

What’s even more interesting, is that there is some research to suggest perceived beliefs about a food can impact satiety not just through psychology, but also physiology. Consuming a milkshake labelled as “620-calorie indulgent” resulted in a greater decline in the hunger stimulating hormone ghrelin compared to consuming the same milkshake labelled as “120-calorie sensible”. Secondly, activation of brain areas involved with appetite regulation was dependent on whether a low-calorie drink was labelled as a “treat” or “healthy”.

Effect of food size on satiety

A number of studies have shown that the perceived size of a food is also important for satiety. For example, the visual perception of a meal was shown to be central for appetite management in a study where subjects ate in darkness. The lack of visual signals caused them to overeat a “super-sized” meal, underestimate how much they had eaten, and despite consuming greater amounts of food they did not report enhanced feelings of satiety. In another study, combining air into a milkshake so that its apparent volume was doubled but its energy density unchanged resulted in a 12% reduction in intake at a following meal and lower reports of appetite. 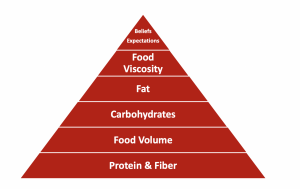 Satiety Hierarchy: A theoretical model for the order of importance of variables that influence satiety.

Jackson is a competitive bodybuilder, online physique coach and self proclaimed prolific consumer of sushi. He currently works at the School of Human Sciences, where he has completed a BSc (Hons) in Sports Science, Exercise & Health. Jackson is also completing his PhD in Exercise Physiology where he is directing the first randomised controlled trial investigating the effects of intermittent vs continuous dieting on fat loss, muscle retention and muscle performance in resistance trained athletes.