UEBC Down Under Wireless 2021 – REPLAY 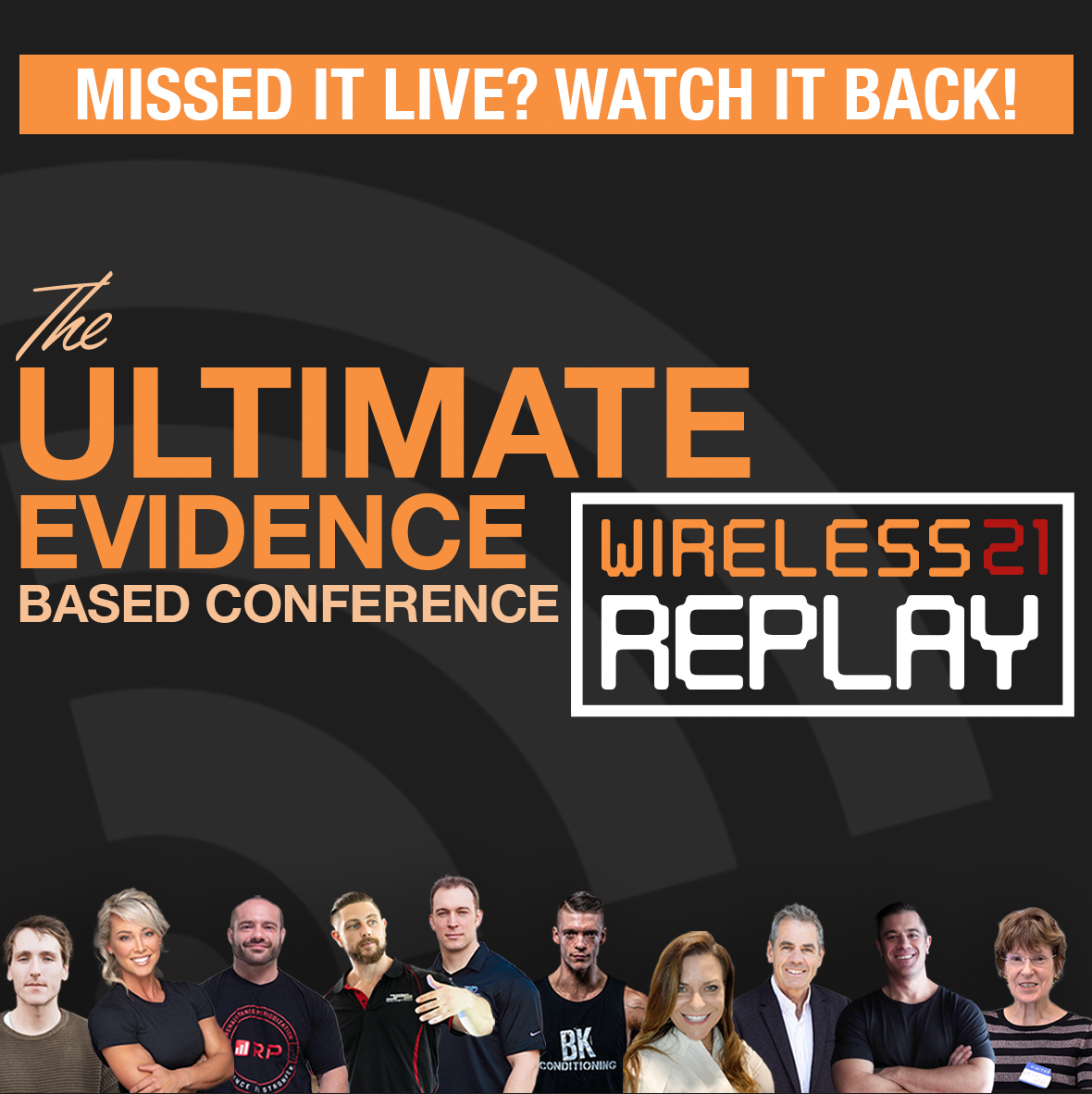 UEBC Down Under Wireless 2021 – REPLAY

Get up to date with the latest evidence-based fitness practices!

Want to improve your knowledge and get up to date with the latest evidence-based practices for natural bodybuilding, powerlifting, strength, nutrition and physique development?

We present to you; The Ultimate Evidence-Based Conference 2021 – Down Under – REPLAY! You receive lifetime access to all the recordings!

This one-day conference was held live on  Saturday 23rd of October 2021  via ZOOM!

Scroll down for presenter info and topics! JOHN HAWLEY – John is currently Director of the Mary MacKillop Institute for Health Research and Head of the Exercise and Nutrition Research Program at the Australian Catholic University, Melbourne, Australia. He has published over 280 scientific manuscripts, written over 100 articles for technical journals and has authored numerous book chapters for exercise biochemistry and sports medicine texts. He currently sits on the Editorial Boards of many international journals including the American Journal of Physiology (Endocrinology and Metabolism), The Journal of Applied Physiology (U.S.A.), The Journal of Sports Sciences (U.K), Medicine & Science in Sports & Exercise (U.S.A.), Sports Medicine (New Zealand) and The International Journal of Sport Nutrition and Exercise Metabolism (U.S.A.). The focus of his lab’s work includes the interaction of exercise and diet on skeletal muscle metabolism, the molecular bases of exercise training adaptation and the cellular bases underlying exercise-induced improvements in insulin action. He is a frequently invited speaker at both National and International scientific meetings.

HOLLY BAXTER – Holly’s heavy involvement in numerous sports over the years, combined with a strong interest in health and wellbeing and extensive research in the field of nutritional sciences, has lead her to extend her skill set to the fitness industry where she educates others as well as actively coaching fitness/physique athletes and body building. Despite recent International success, claiming x2 World championship level wins in 2015 for Natural Fitness modelling, Holly also has a strong personal interest in Functional / HIT training. With a background in athletics, specifically track sprints during her junior school years and university career, she believes the real challenge lies in developing the body to be able to perform specific skills.

SHONA HALSON – Professor Shona Halson is from ACU’s School of Behavioural and Health Sciences and prior to this was the Head Recovery Physiologist at the Australian Institute of Sport for over 15 years and has been a part of three Olympic campaigns with the Australian Olympic Committee. Her research focuses on sleep, recovery and fatigue and she has published over 130 peer-reviewed articles and multiple book chapters. Shona is an Associate Editor for the International Journal of Sports Physiology and Performance and also provides consultancy services to the Australian Open Tennis Tournament and Nike as part of both the Nike Performance Council and Nike Sports Research Advisory Group. Shona also consults to a number of national and international professional sporting teams.

JACOB SCHEPIS- Jacob Schepis is the co-owner of JPS Health & Fitness. For the past 10 years he has actively worked in the fitness industry, as a coach, content producer and mentor of coaches. Jacob has not only competed at a national level in bodybuilding and powerlifting, but has also coached numerous national level and pro physique athletes and powerlifters. His in the trenches experience as a coach and athlete have led him to become highly sought after by aspiring coaches and fitness enthusiasts from around the world, where he now helps Raise The Standard of the industry via the JPS mentorship course and other educational services and events.

MIKE ISRAETEL– Cofounder of Renaissance Periodization, Dr. Mike Israetel holds a PhD in Sport Physiology from East Tennessee State University. Formerly a professor of Exercise and Sport Science in the School of Public Health at Temple University in Philadelphia, Mike has taught several courses, including Nutrition for Public Health, Advanced Sports Nutrition and Exercise, and Nutrition and Behavior. Originally from Moscow, Russia, he has worked as a consultant on sports nutrition to the U.S. Olympic Training Site in Johnson City, TN, and has been an invited speaker at numerous scientific and performance/health conferences worldwide, including nutritional seminars at the U.S. Olympic Training Center in Lake Placid, NY. Mike has coached numerous athletes and busy professionals in both diet and weight training, and is himself a competitive bodybuilder and professional Brazilian Jiu Jitsu grappler.

JAKE LINARDON – Dr Jake Linardon received his PhD in 2017 and is currently an early career Research Fellow at Deakin University, Melbourne Australia. His research centres around evaluating, implementing, and disseminating a broad range of treatment and prevention approaches for eating disorders. He has published over 40 peer-reviewed research articles, many of which have been published in world-leading psychiatry and clinical psychology journals. He also serves on the editorial board for the International Journal of Eating Disorders. He is the founder of @breakbingeeating, an open access website designed to provide free evidence-based information and self-help strategies for people with eating and body image issues.

BRANDON KEMPTER– Brandon Kempter CISSN, PgD Nut Sci, is the head coach of BK Conditioning, a company specialising in contest preparation for natural bodybuilders. Having been involved in the industry for a decade, he is now recognized as a world renowned coach and a professional bodybuilder in two federations. Alongside working in a coaching capacity, he has presented at numerous events aimed at educating future coaches on safe and effective contest preparation practices.

ERIC HELMS– Eric Helms, PhD, CSCS is a nutrition, sport science, and exercise/sport psychology researcher/practitioner with a mission to support the lifting community. He is co-founder and chief science officer for Team 3D Muscle Journey, chief author of the Muscle and Strength Pyramid books, co-founder and contributor to the Monthly Applications in Strength Sport research review, co-host of Iron Culture Podcast, and a Strength & Conditioning Research Fellow in the Sports Performance Research Institute New Zealand, at the Auckland University of Technology. He’s coached 100’s of recreational and competitive physique and strength athletes from novice to world champion, published scores of peer-reviewed articles on strength and conditioning, psychology and nutrition as they relate to physique and strength sports, and authored book chapters for strength and conditioning, nutrition, and personal training professionals. In his personal life, Eric is a multi-sport lifter, earning a professional qualification in drug free bodybuilding with the PNBA, and competing in powerlifting, weightlifting, and strongman.

LUKE LEAMAN – Luke’s lifelong obsession with strength training started at an 8 years old, in the early 1980’s. After seeing Arnold Schwarzenegger in Conan the Barbarian, he became obsessed with the idea of building muscular size and strength. So the journey began. During his school years, the focus for lifting transitioned into strength and power training forTexas football, and eventually led to competing in powerlifting, strongman, bodybuilding, and in recent years competing in Brazilian Jiu Jitsu.Luke has spent the majority of his career learning from many of the top industry experts, in many various areas of the industry, including strength, conditioning, rehab, mobility, flexibility, nutrition, and health. He is regarded as one of the top international educators in the field of health and fitness, and channels his education and philosophy through Muscle Nerds, the industry education and training company that he and his wife Zoe started in 2015, after leaving his tenure with Poliquin Group.

Luke teaches from a platform of 3 decades in the trenches, experience and application, while also using past and current scientific literature, in order to provide his students with the best learning experience.Luke and Zoe’s North Brisbane gym, The Institute of Physical Culture, is their newest venture, with the philosophy of respecting the history and knowledge of physical culturists throughout the ages, and combining their experiences with current scientific findings. Education forms the backbone of everything we believe in at Muscle Nerds and The Institute of Physical Culture.